Juan Casanova, 47, at his home in Hoctun showing his American and Mexican passports.
Read 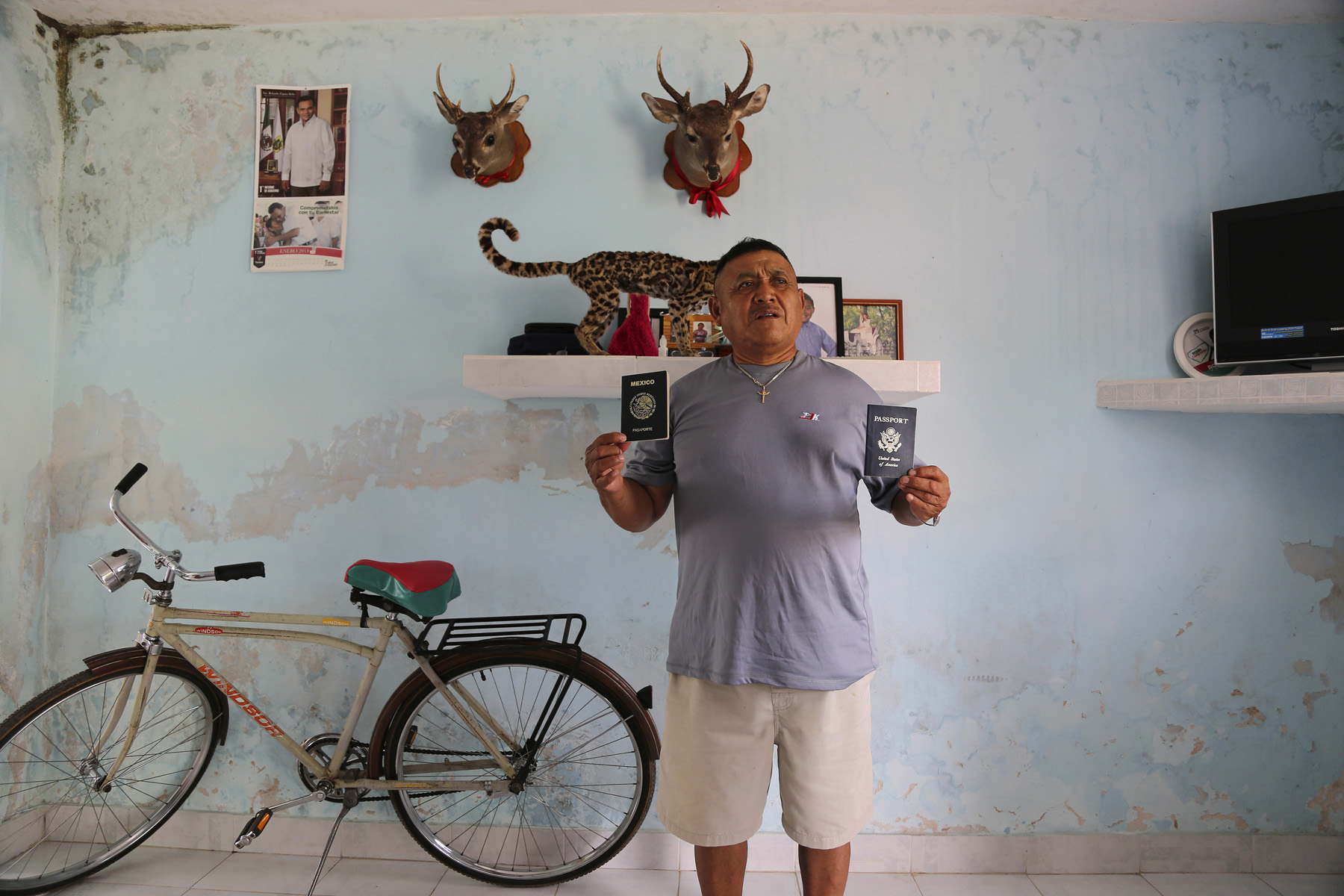 The Ones Left Behind

The lives and hopes of migrant families in ghost towns of the Yucatan, Mexico.

In November 2014, a team of 11 professionals from six nationalities went to Mexico to help humanize the immigration debate through investigative photojournalism. The team worked in Yucatan, a non-traditional migrant-sending Mexican state with one of the fastest-growing rates of migration to the United States.

The core of this project was to bring light to the human side of immigration –a hot policy arena that tends to ignore the social, cultural and emotional sides of immigration. We conducted our fieldwork in three communities about two hours away from Merida, the state capital: Cenotillo, Hoctun and Tunkas. In the past fifteen years, these three rural communities, classified by the Mexican Government as “highly marginalized,” have lost a significant percentage of their population to the United States –in the case of Cenotillo, as high as 60 percent. Our team interviewed and photographed 35 families.

In October 2015 our work became a full exhibit, hosted by the Cervantes Institute in Manhattan. The exhibit, one of the most successful in the Cervantes Institute’s history in New York, was designed to provide a healthy reality check to help tear down stereotypes about migrants, and bring compassion and empathy to the public debate — challenging all of us to imagine more creative solutions to immigration problems.

Here is the core of the exhibit: A collection of environmental portraits and stories that embodies the uncertainties, achievements, failures, fears and hopes of those who stayed behind –either expecting their opportunity to cross the border, or waiting for years for their family members to return –and those who came back home and reminisce.

“The powerful and poignant voices of the people in the Yucatan region of Mexico speak of loss and despair wrought by massive emigration to the United States. The painful, and sometimes joyful, memories and emotions etched in the faces of family left behind are recorded in a series of striking photographs.  Emotions writ large as they wait for the return of sons, daughters, fathers and mothers who pursue their own perception of life’s riches.” –Stephen Crowley, The New York Times 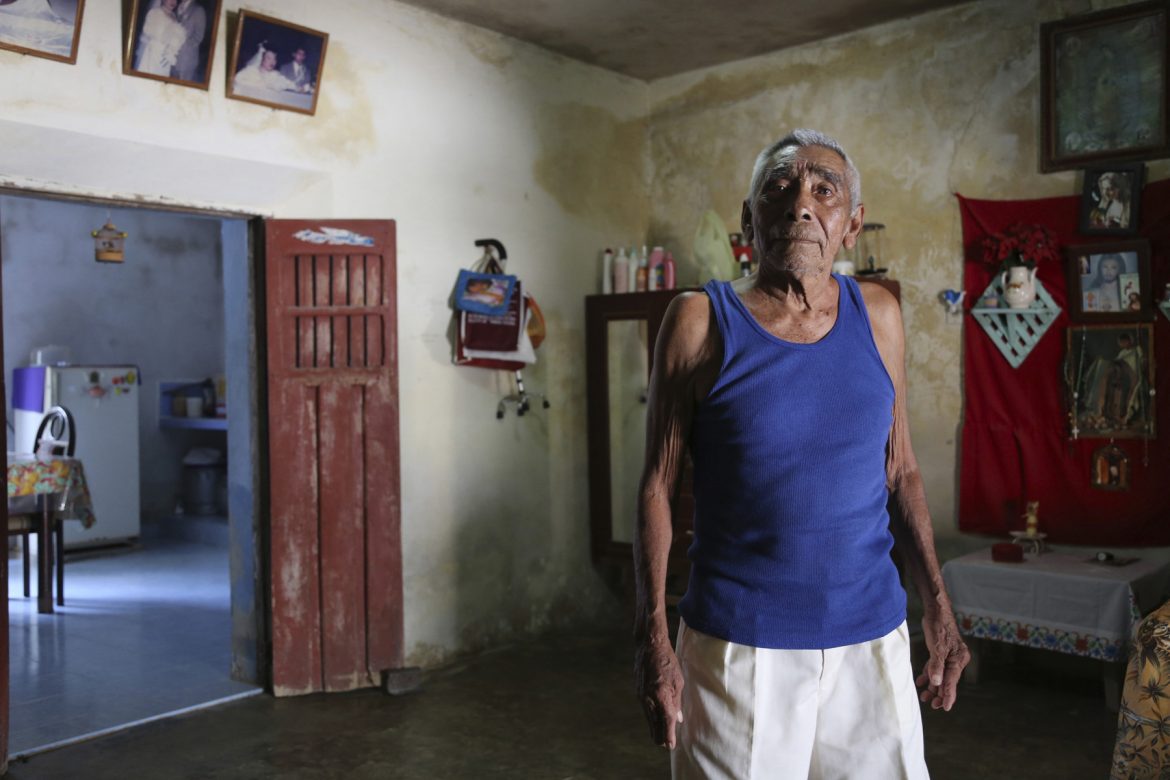 Candido, 81, worked intermittently for a decade in California as a “bracero”, over 40 years ago. “Times have changed. Crossing the border has always been very difficult but it’s even tougher today. And the worst thing about it all is that you don’t even know if you can get a job. It’s taking a risk for a life that may be unachievable. I would tell young people not go.” 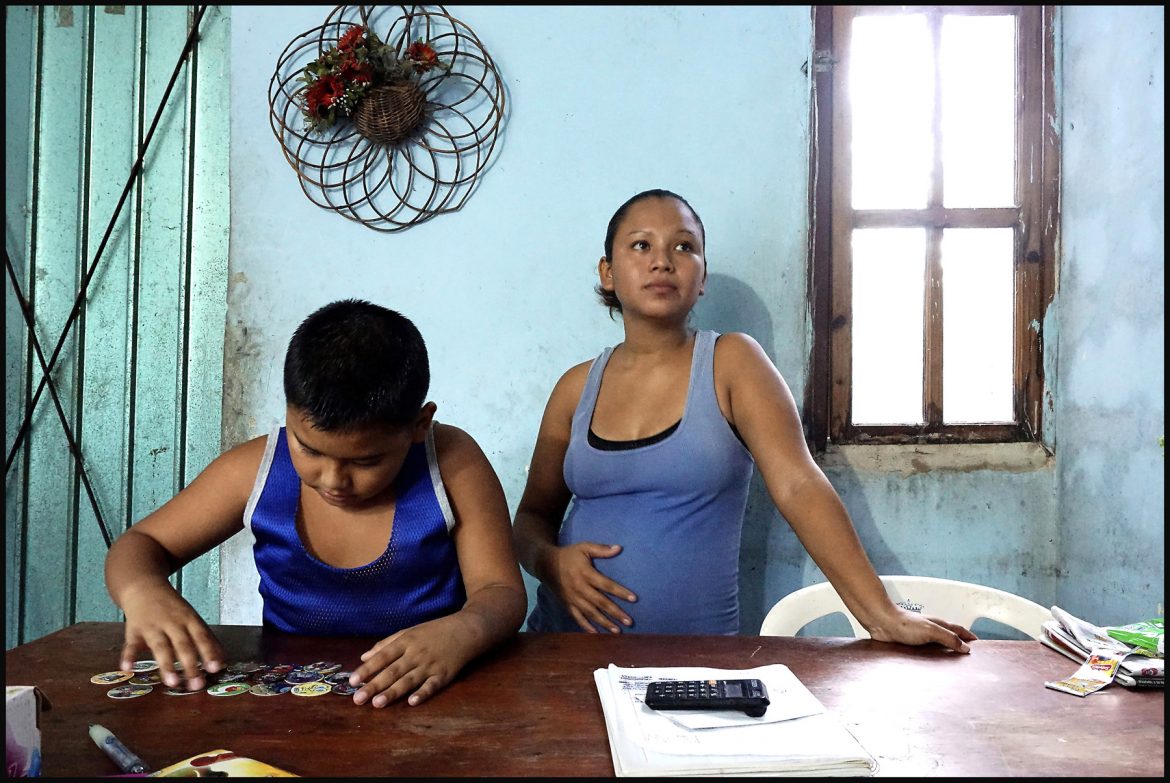 Maria and the dreamer

Mari, 24 years old, with her son Jose, who was born in Orlando, Florida, during the seven years she lived there. “My mother and my two brothers are still in Florida. My dad was deported the five times he tried to reunite with us there. I returned to Merida two years ago to be here with my dad.” 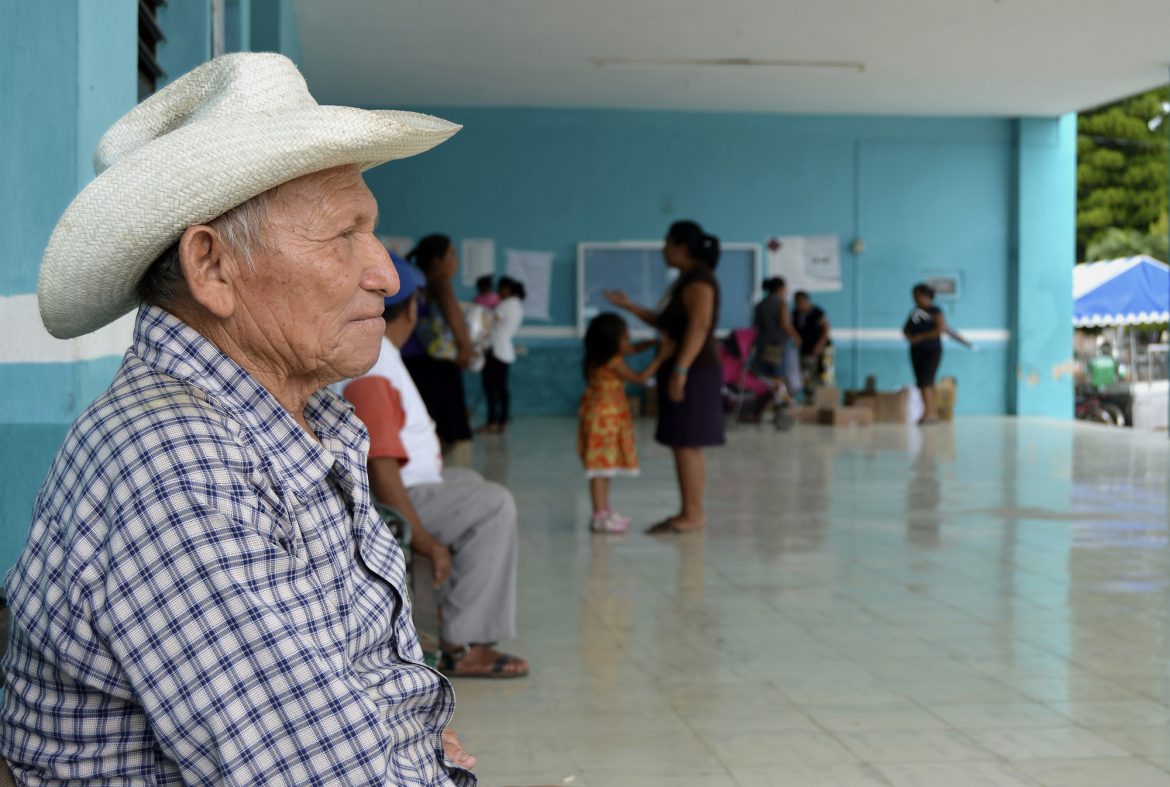 Miguel “El Huerito,” 70, returned to his village after spending 10 years in California. “They gave me a job the first day I arrived in the United States. I sent money to my wife every fortnight.  She bought land and began to build our house. One day she told me, ‘The work is finished. Whenever you are ready to return, you will be coming to your own home.'” 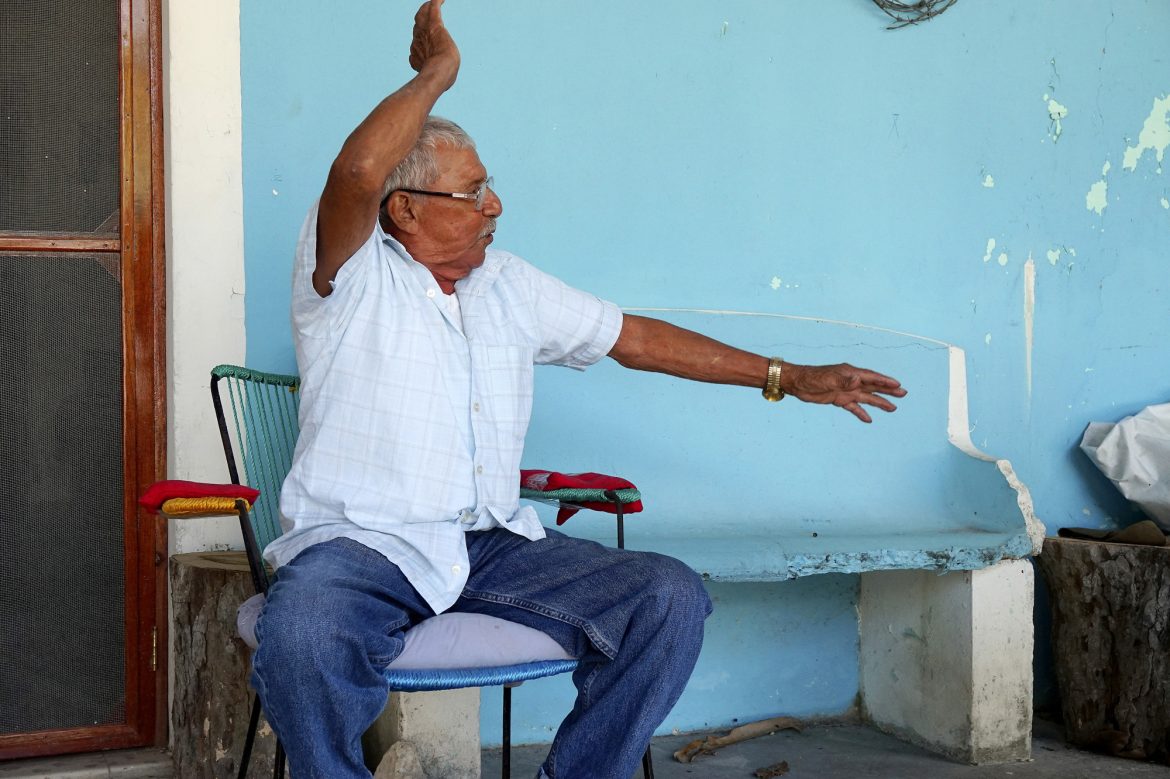 Juan, 72, telling the story of how he crossed the border. “I ran and ran and ran, and I fell down and continued running; they almost caught me several times but I continued running because I was thinking of my family. I had to reach the United States, and I had to make enough money to feed my people. You cannot maintain a family here in Mexico.” 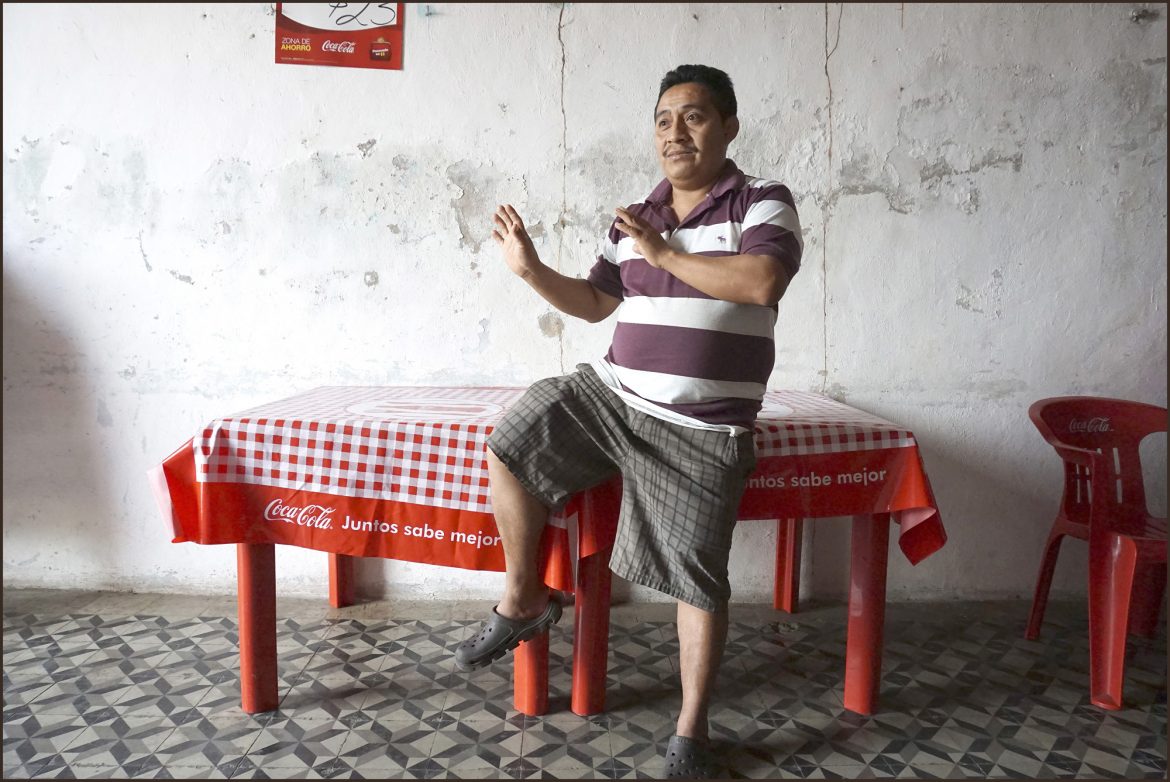 Martin, 38, went to the States for three years and worked in a restaurant in Dallas. He now owns a small shop in his hometown, though he plans on returning to the States sometime in the future.  “As soon as I crossed the border, I called my wife. I was so happy because I realized I had achieved what I promised my family I would do for them.” 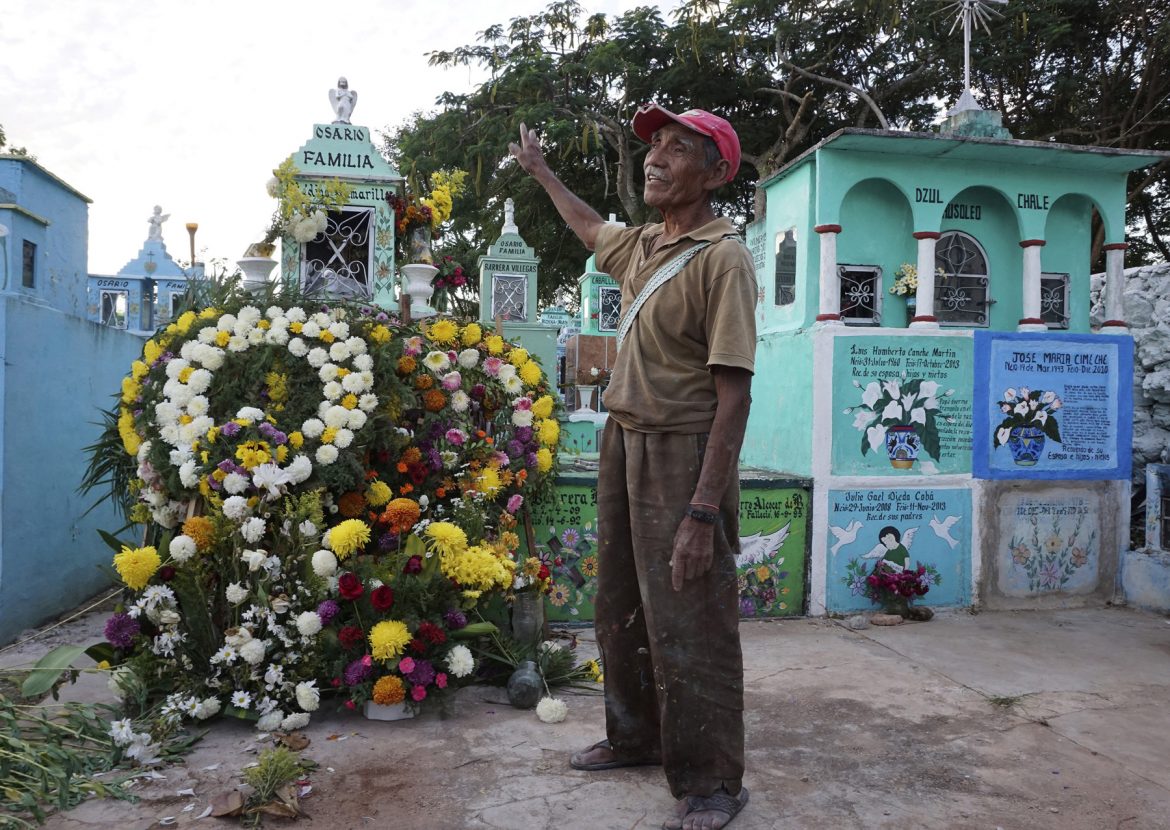 Anacleto, 85, has been the caretaker of the Hoctun cemetery for 50 years. “She was buried yesterday. She was 72. Fifteen years ago her five sons left for the United States. They could not be here for the funeral. They will never come back.” 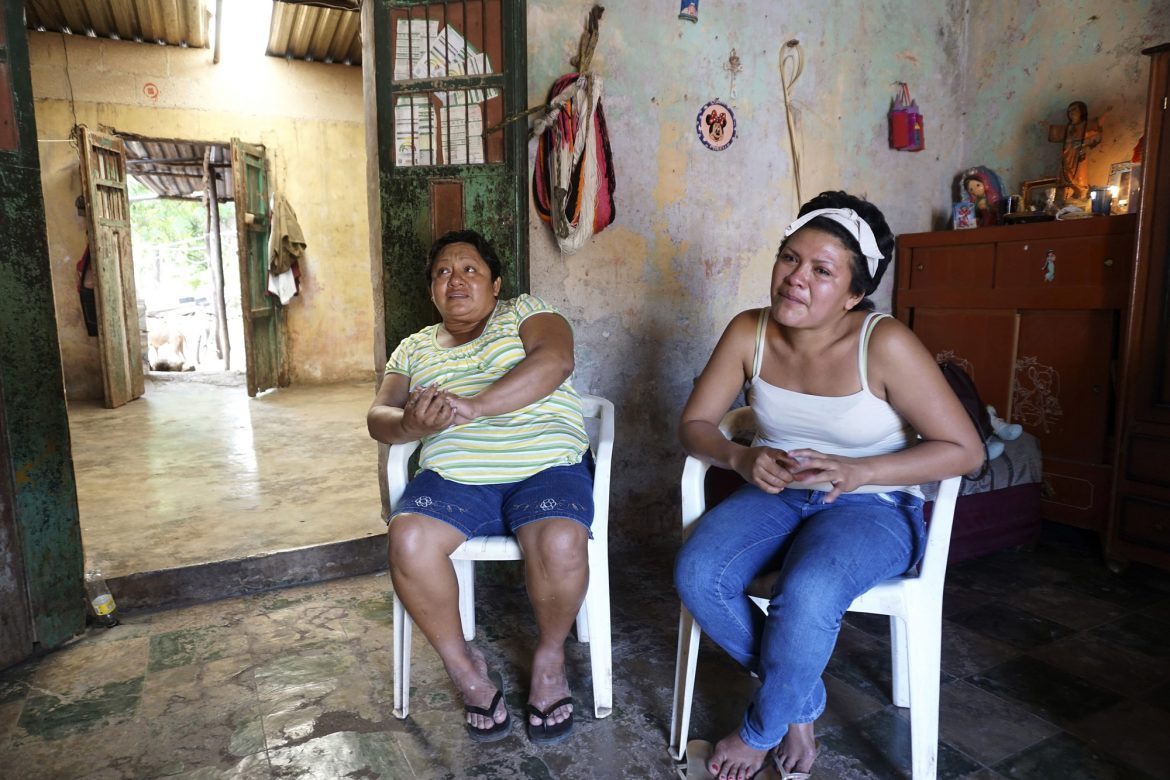 Celia, 44, and her daughter Karime, 26, have parallel lives. Both married husbands who left for the United States shortly after marrying them. Karime summarizes a common feeling among women in her hometown: “When our husbands leave we all have hopes that they will return soon. But almost nobody comes back home. My husband left in search of the American dream, and on the way he lost his family and I lost mine.” 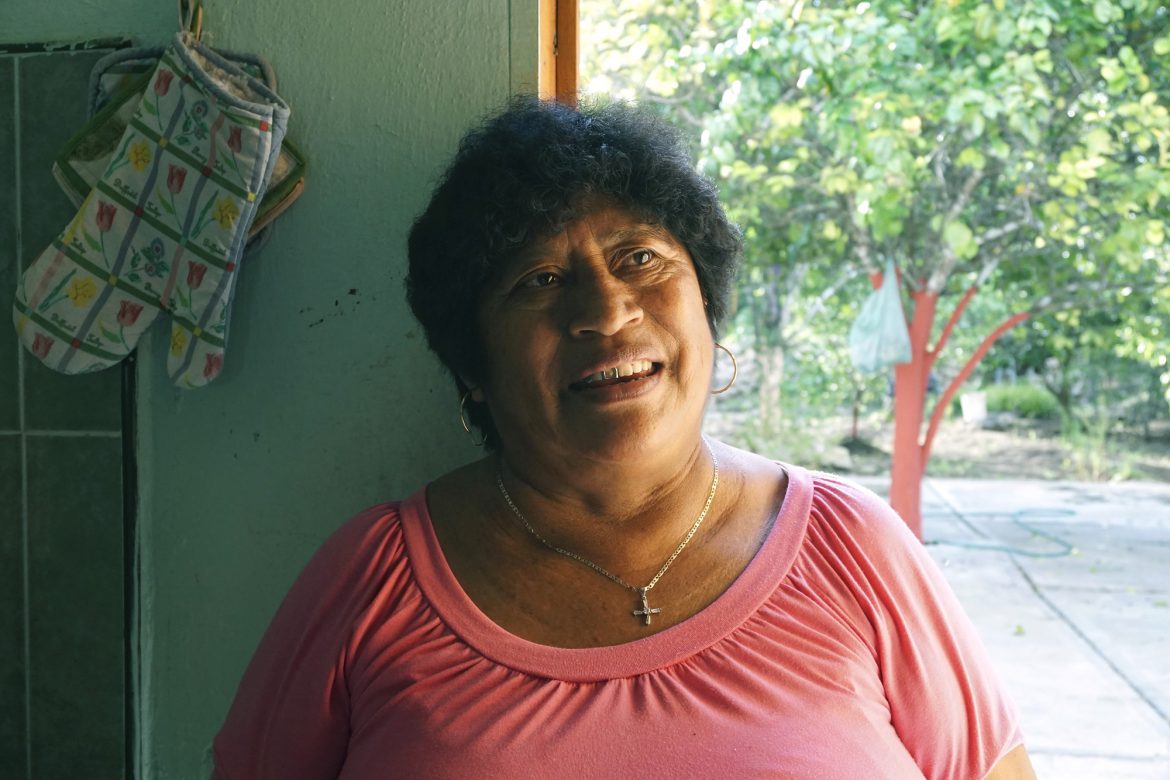 Rufina, 59, has a daughter who migrated to the States 12 years ago, at age 16 and just 10 days after her wedding. Her daughter has two children born in the U.S. Her U.S.-born grandchildren travel to Cenotillo to visit her grandma, but her daughter is undocumented and cannot travel to Mexico. “We are all so happy. My daughter called me on Monday to tell me the news about Obama’s immigration policy. I pray my daughter can return home soon.” 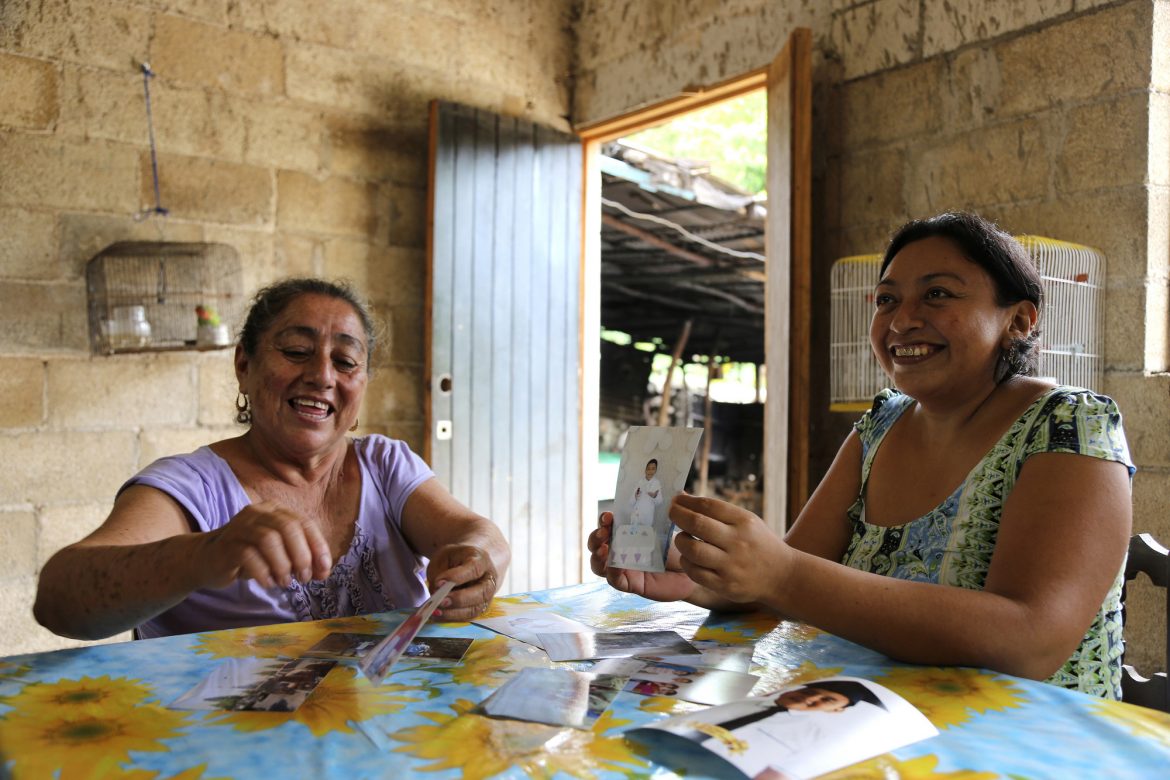 Clara and Wendy, the mother and the wife of Steve — a Hoctun native who migrated to the United States 12 years ago — showing family photos. “We are two women waiting for the same man. We pray every day that he comes back soon.” 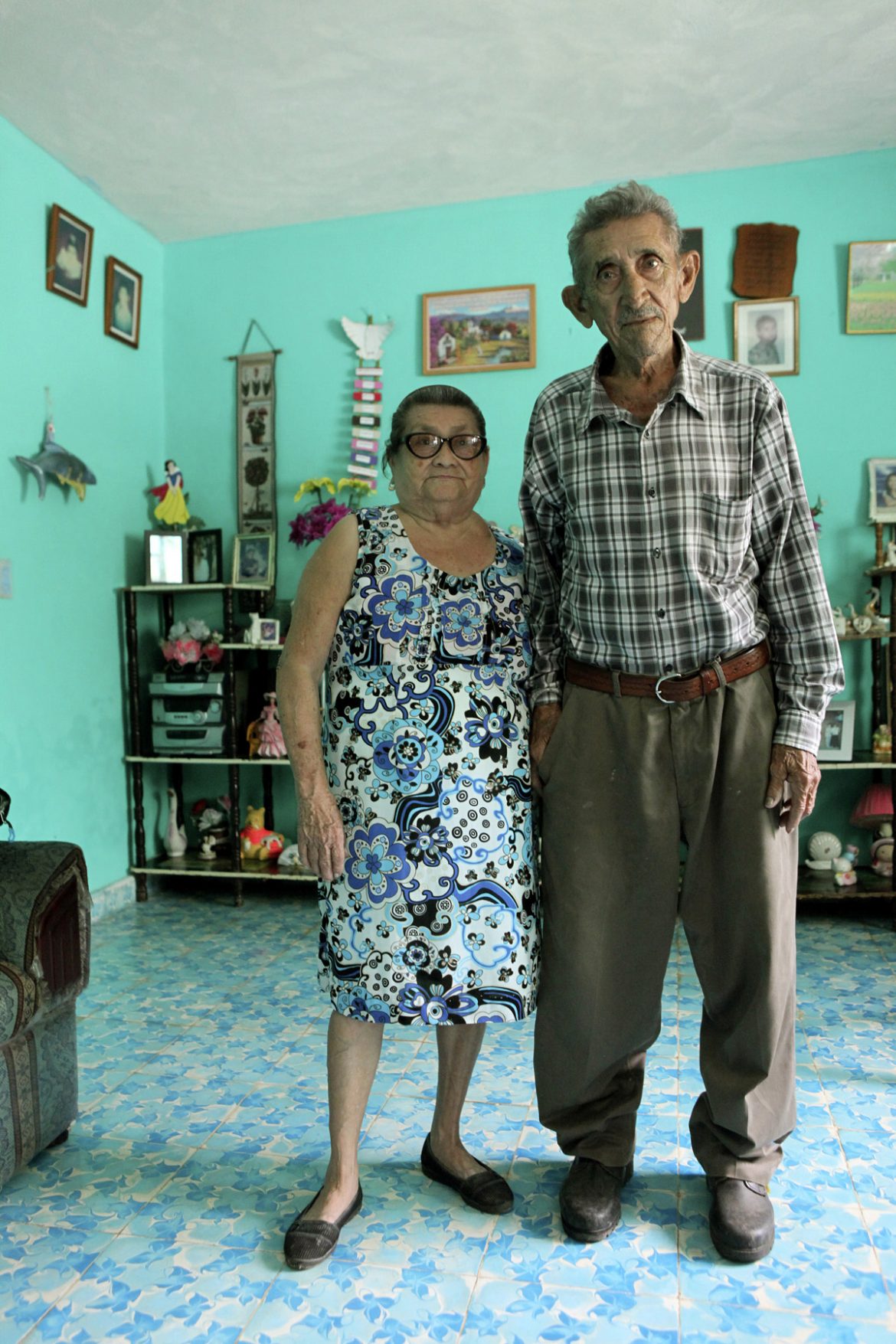 America Libertad, 80, and her husband Mario, 81, at their home in Cenotillo. Their four sons have been in the United States for decades, and now have Green Cards — mostly benefiting from President Reagan’s amnesty. Their first child crossed the border at age 14. Mario says: “Migration to the United States has destroyed the culture of marriage in our village. With so many men going north this place became a mess. Crossing the border has broken so many families.” 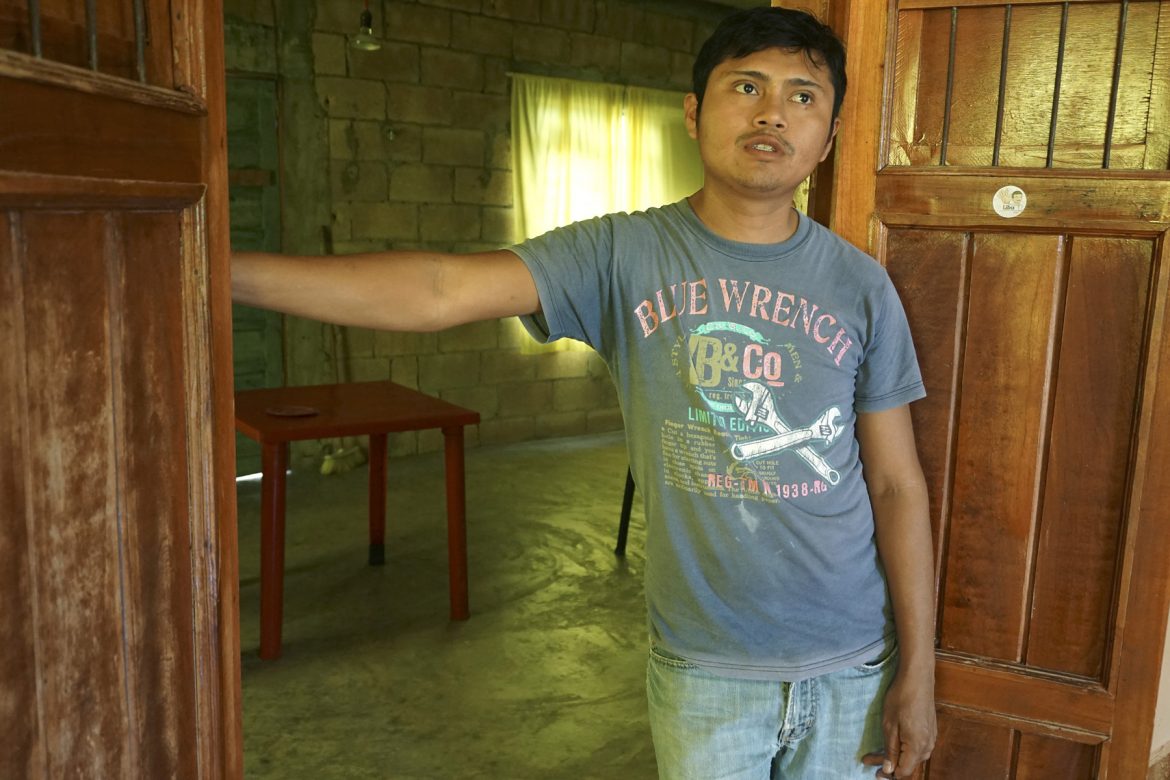 Wilberth, 29, at the new home he built with the money he earned in the United States, where he lived for nine years. “I came back to Mexico four years ago. After my sister married and moved out of the apartment we shared in Denver, loneliness overcame me. I felt very depressed and decided to return home. Sometimes when I look back, I wonder if I made the right decision”. 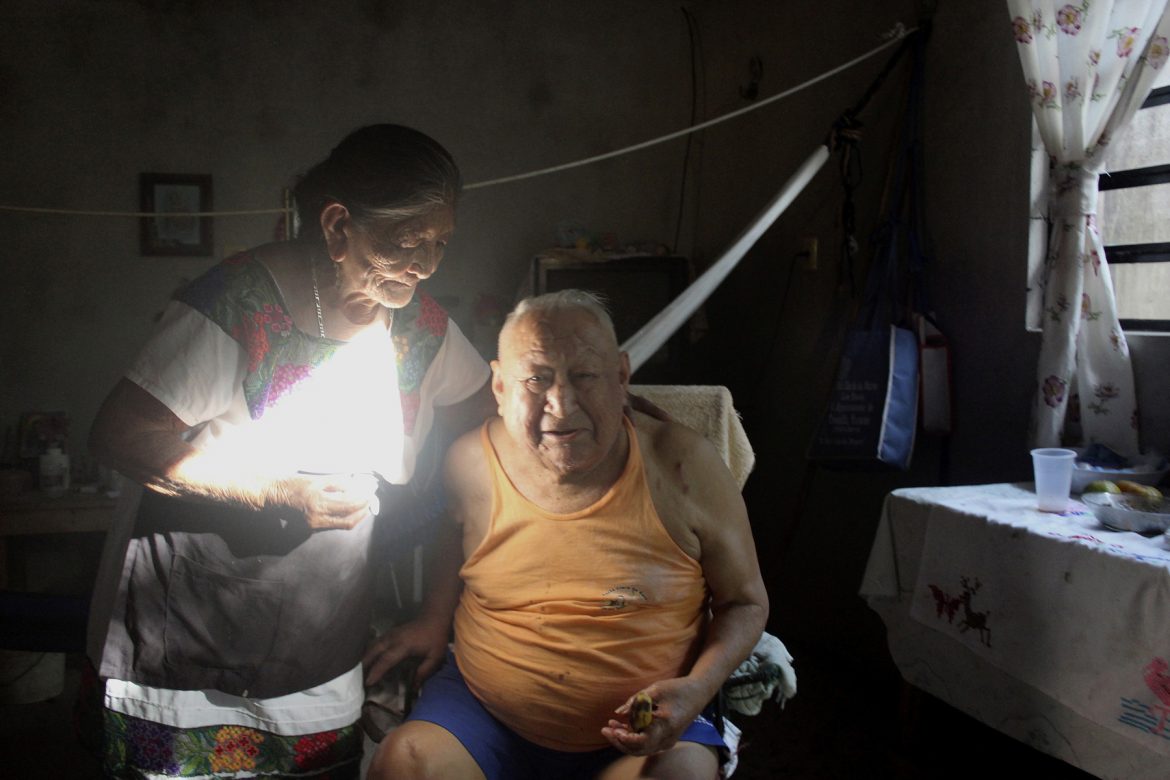 Dominga and her husband

Dominga and her husband, who are in their eighties, have sons and grandchildren in the United States. “My grandsons in California always tell me: ‘Grandma wait for me, please don’t die.'” 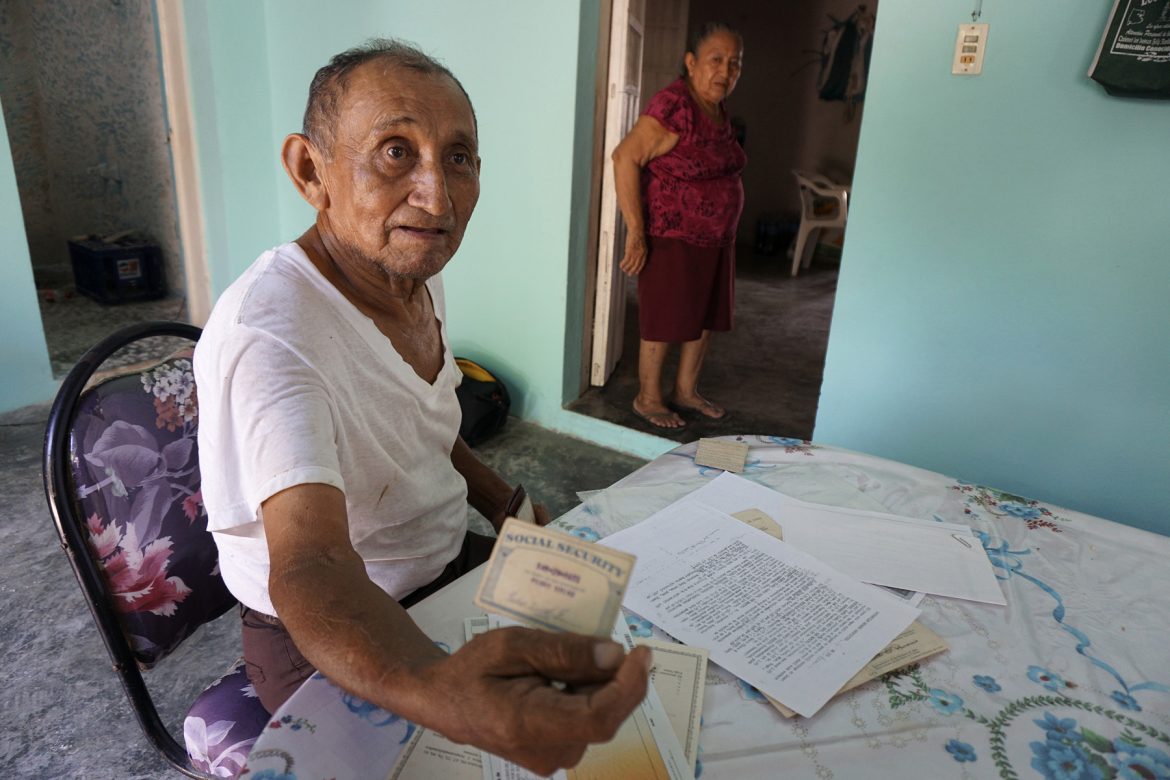 Pedro and his wife

Pedro, 73, showing his U.S. Social Security card from 1964, when he was hired as a “bracero” to work in agriculture in California. “After my contract expired, I returned to Mexico. Shortly after, I crossed the border without papers. I wanted to stay there, but there was no chance. When you are undocumented in the U.S., you can’t be free. In the late sixties, we were always scared. But I miss California.” 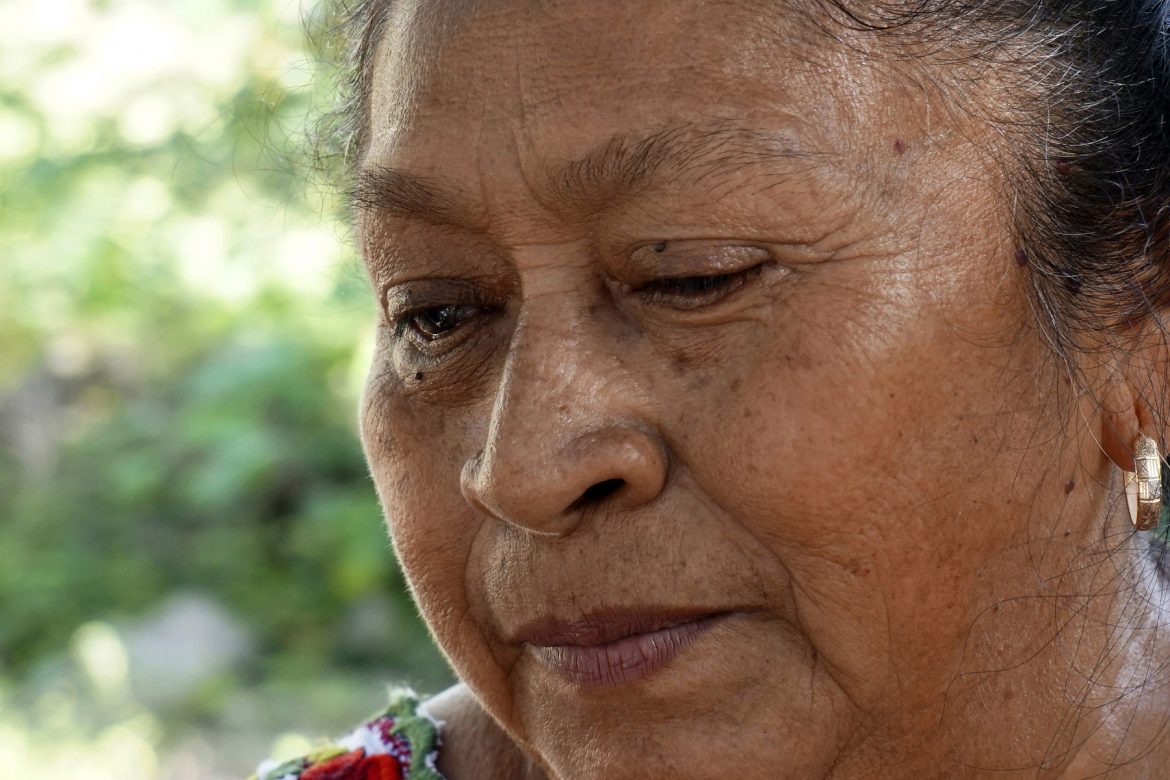 Elda, 63, is the mother of several children who migrated to the United States. “Crossing the border is hell. Immigrants arrive in the United States without shoes nor dignity.” The day after this picture was taken, one of Elda’s sons was deported back to Mexico. 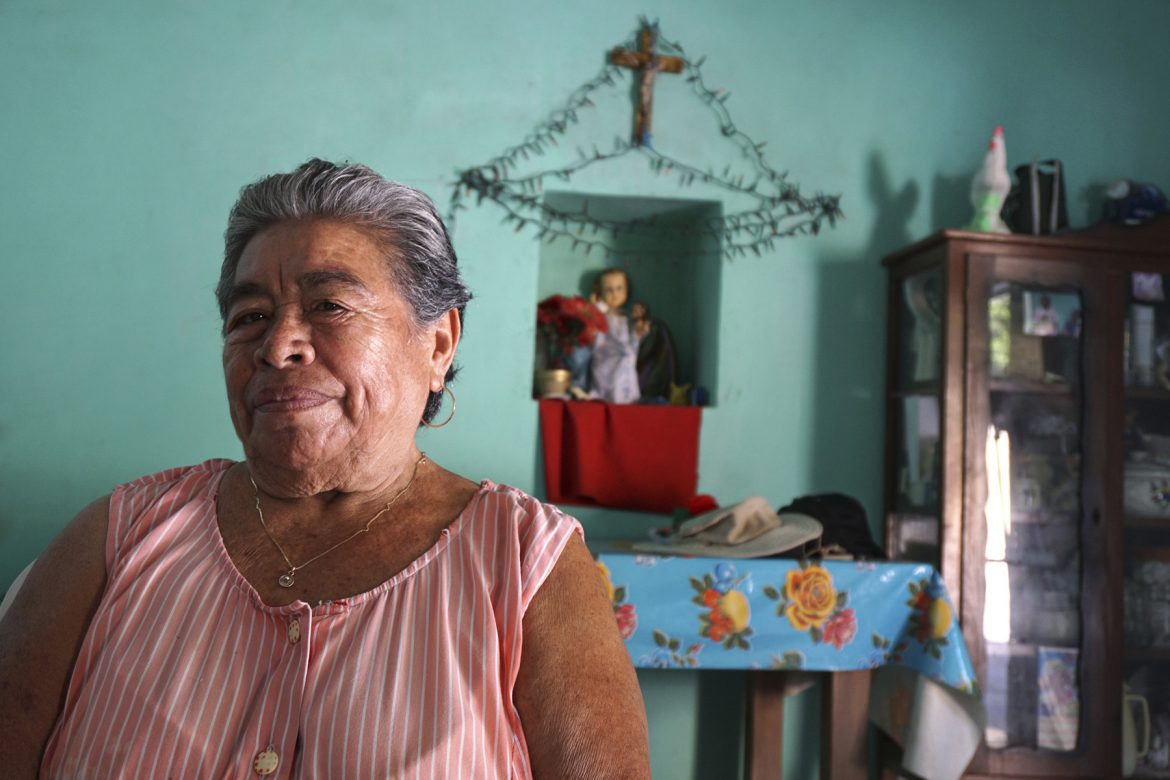 Enedina, 71, is a mother of two migrants, one who returned after 13 years in California, and another who has not been home in 25 years. “I hope my son can finally get his papers so I can see him again. All I can do is pray. We’ve been waiting for a long time. I hope Obama can make it happen.” 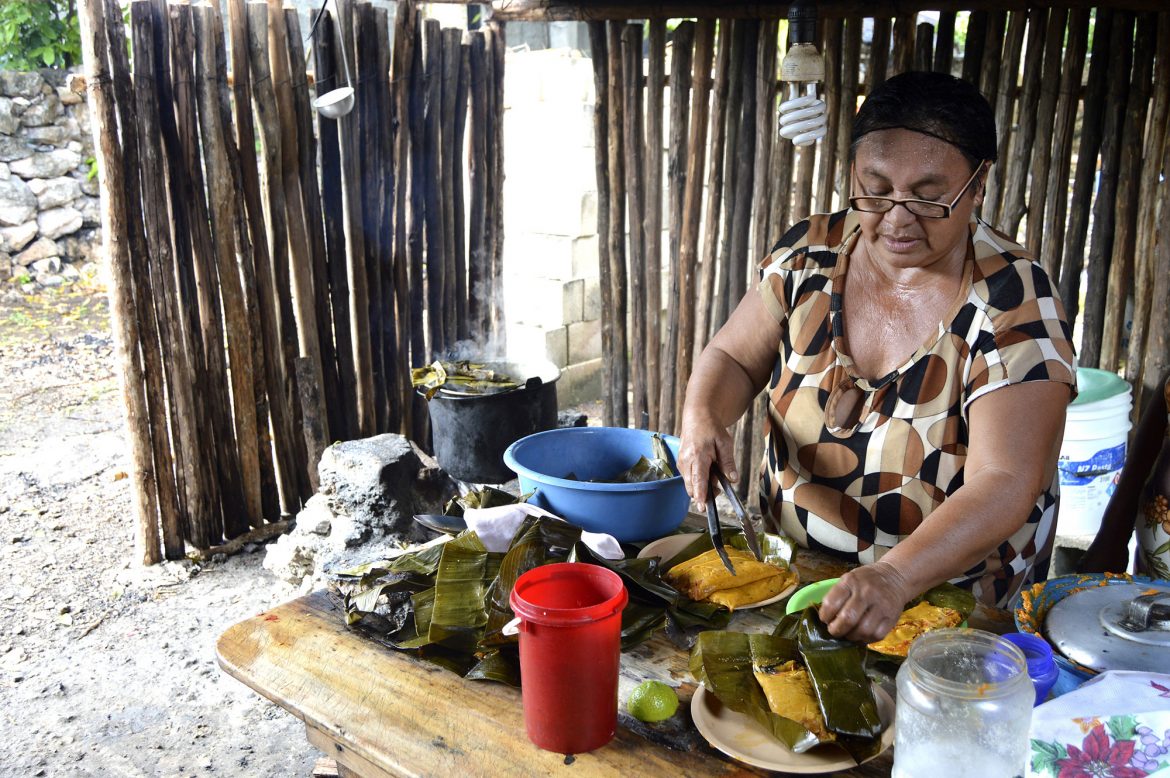 Margarita, 54, has a son who has been living in the States for 14 years. “I feel much sadness when I think that maybe I won’t see my son again. Sometimes the sons of Tunkas come back and their parents have already died.” 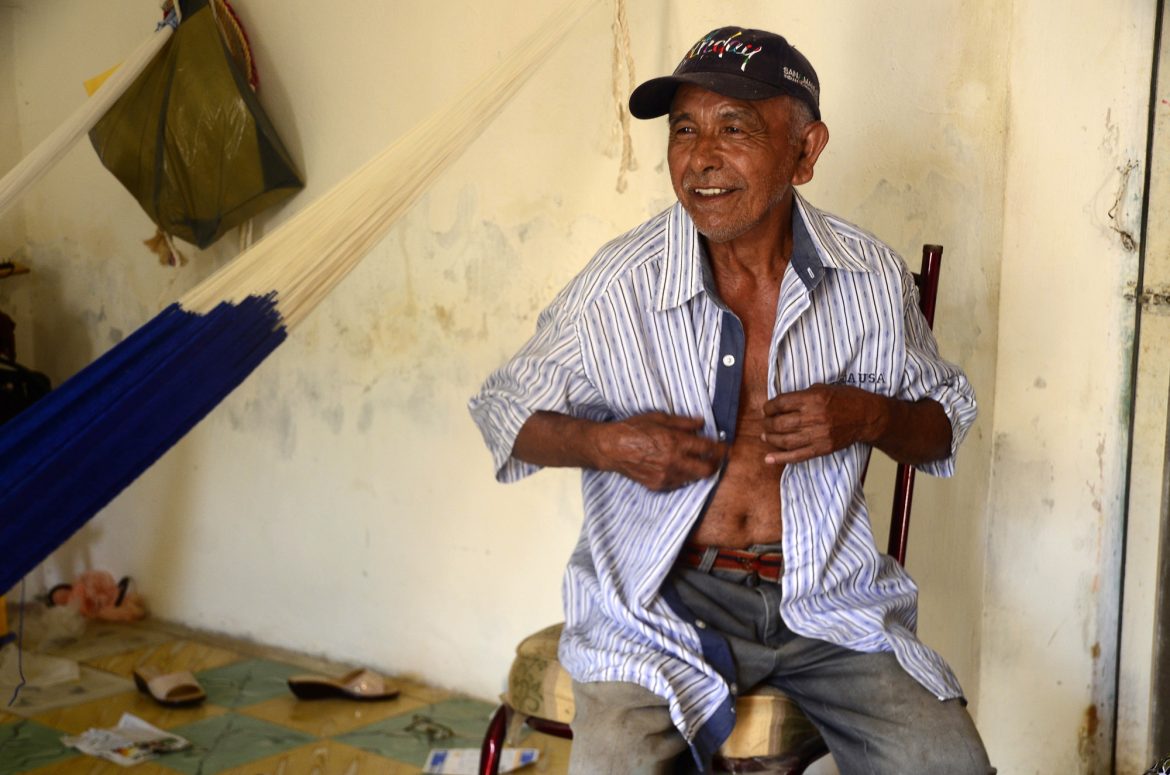 Jose Rodolfo, 70, lives in both the United States and in his small town in Mexico. “I became an American citizen. My American dream is to eat well, to wear better clothes, and be comfortable. There is no misery in America.” 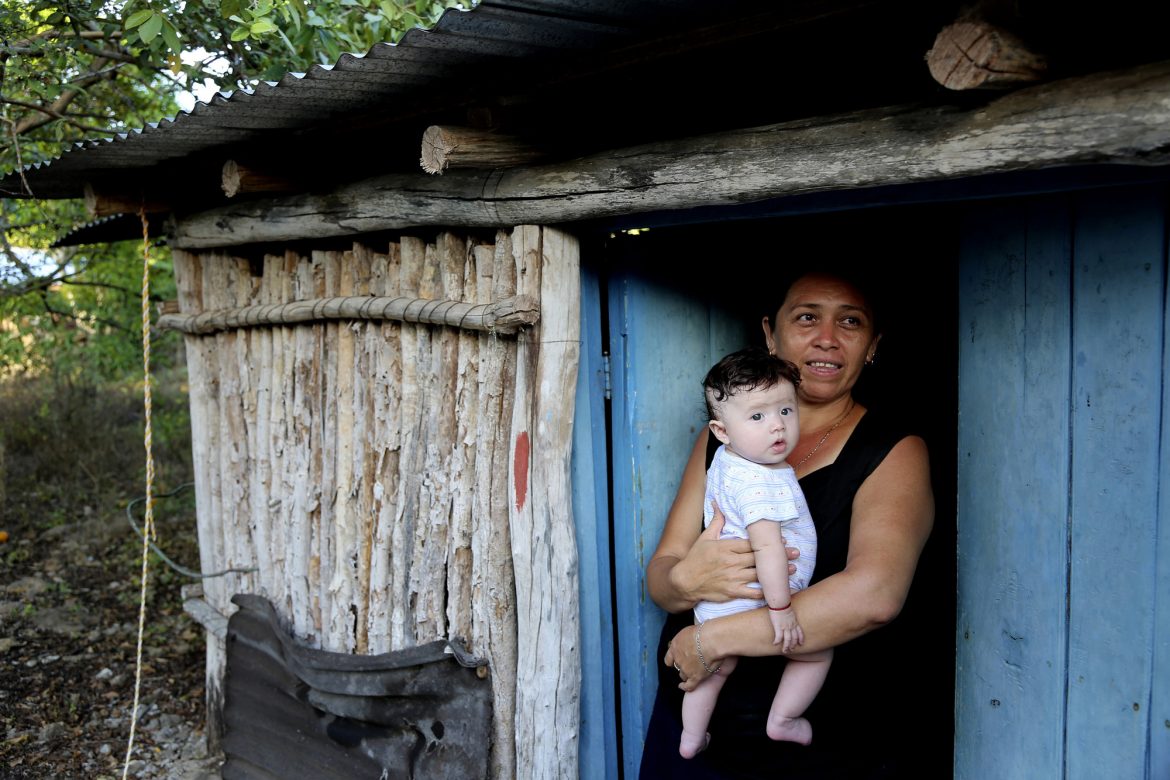 Sonia and her granddaughter

Sonia, 41, with her four-month-old granddaughter. Her husband left for the United States 17 years ago and has not returned. “People change when they cross the border, but often for the worse.” 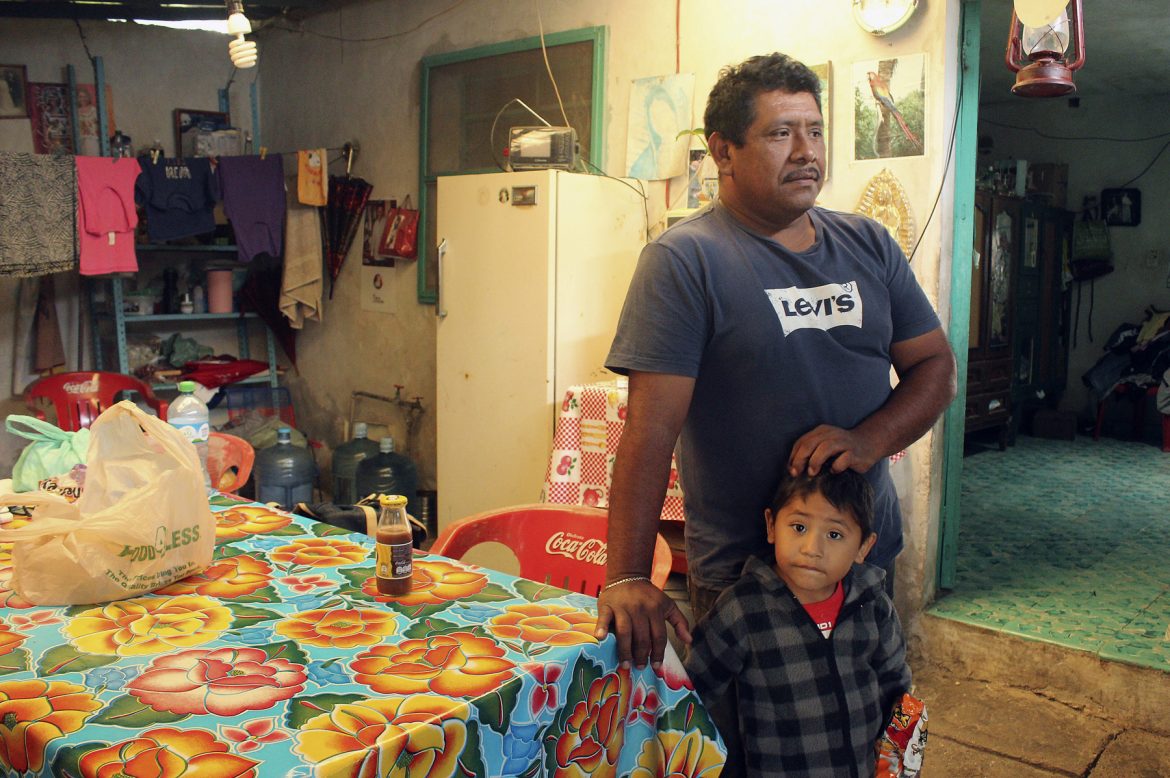 Ananias and his son

Ananias, 40, and his son at their home in Cenotillo. “I know there is the potential to make lots of money in the United States. But my experience as immigrant included lots of partying, drugs, and even time in prison, so I also know that you run the risk of paying a very high price. If I ever go back, I would do it legally and live the American dream the right way”. 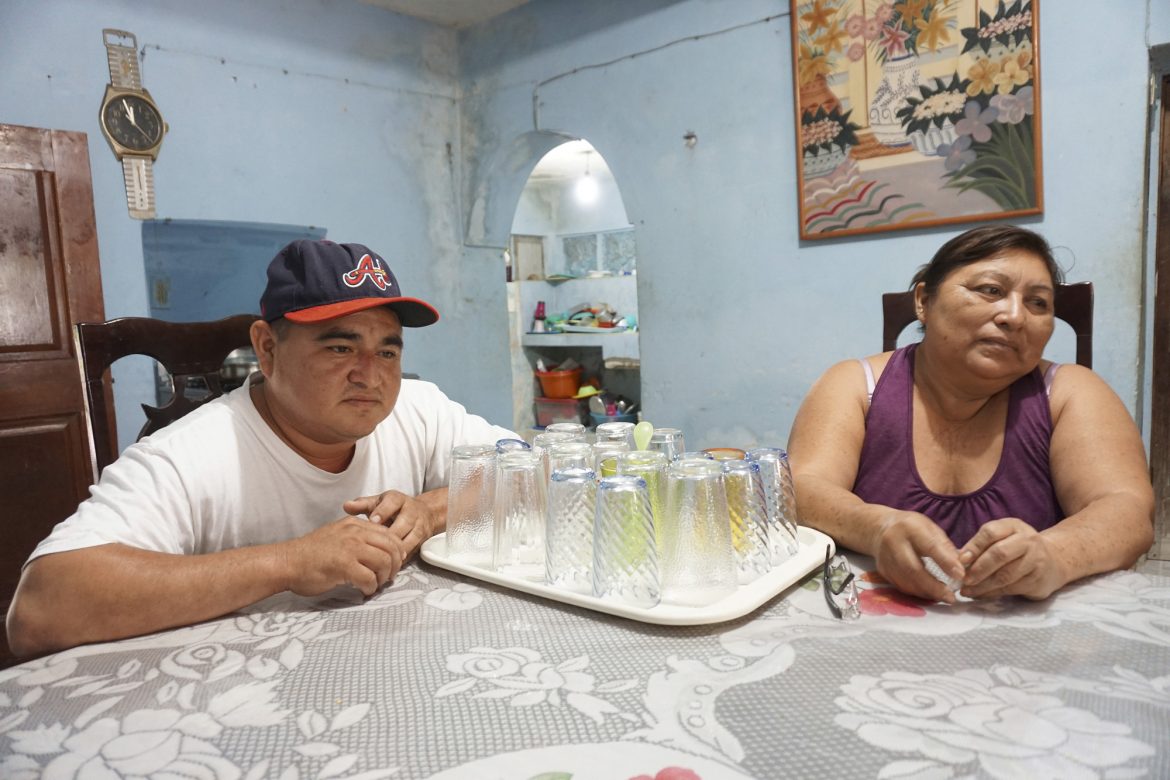 Francisca, 57, and her oldest son Lorenzo, 36, at their home in Tunkas. Francisca has two other sons in the United States. Lorenzo has lived intermittently in California, but was deported three years ago. After several failed attempts to cross the border again, he lives now in his village. Lorenzo says: “The American dream is being able to achieve my dreams here in Mexico: to buy a house and provide for my family. I miss California. Americans are kind and gentle, and that’s why we go there.” 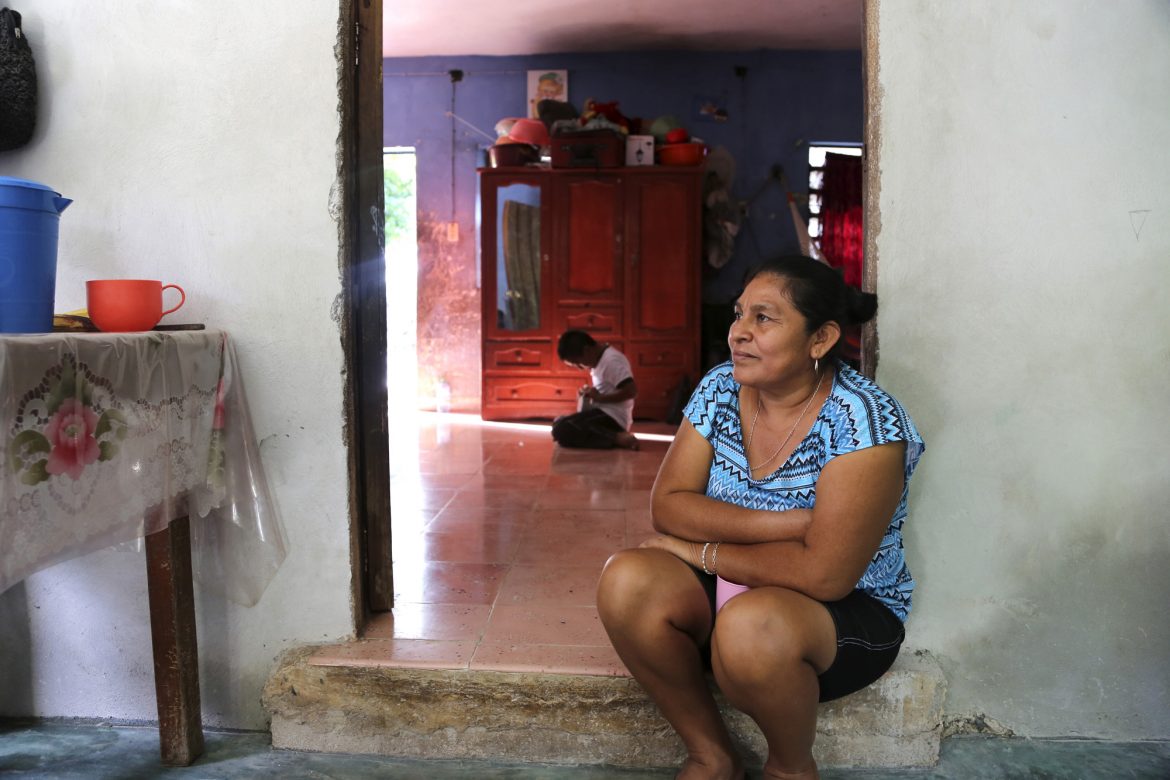 Maria, 48, at her home in Tunkas. Her husband migrated to California over 20 years ago. He has been deported several times, but now lives in L.A. “Every time I ask my husband when he’s going to come back, he says he’ll come back when he’s able to afford a plane ticket. It’s always the same story. In all these years he has not saved any money. He drinks a lot, and I know he’s not happy there.” 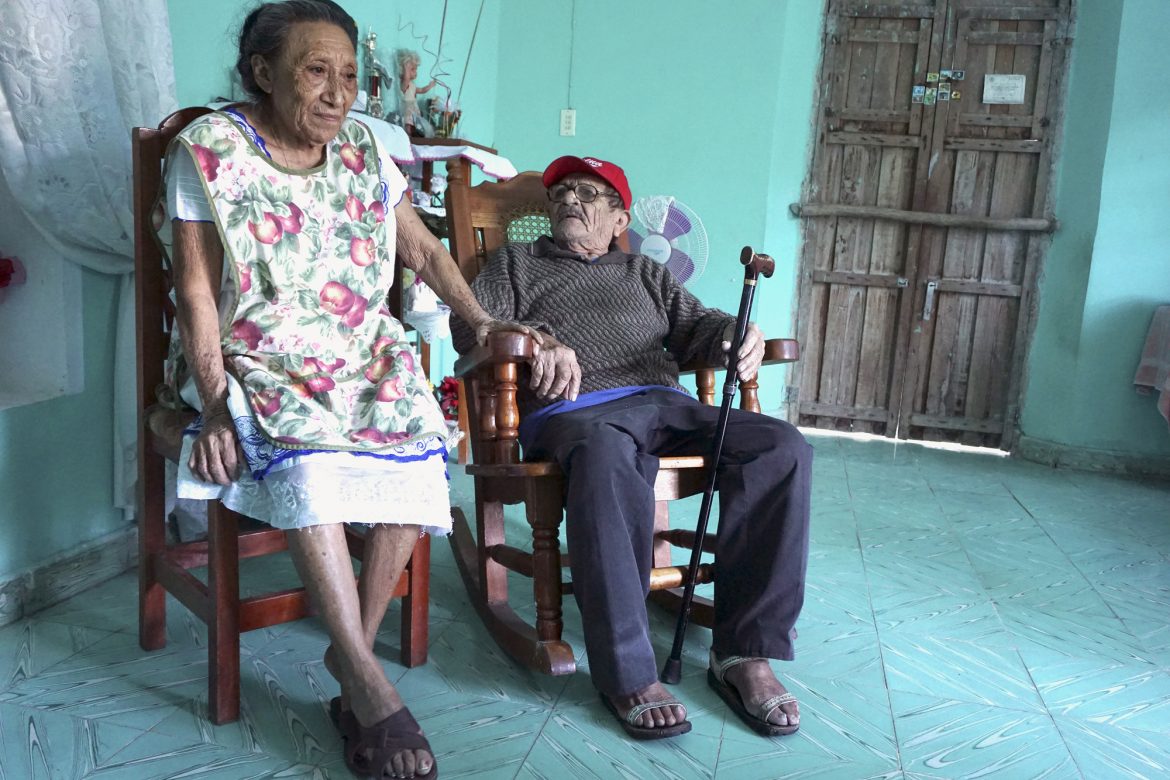 This project was produced by DAWNING. It is an independent effort, self-funded, non-partisan and non-ideological, in the tradition of social science and journalism in the public interest.

Logistics Partner: The National Commission for the Development of Indigenous Peoples, Government of Mexico